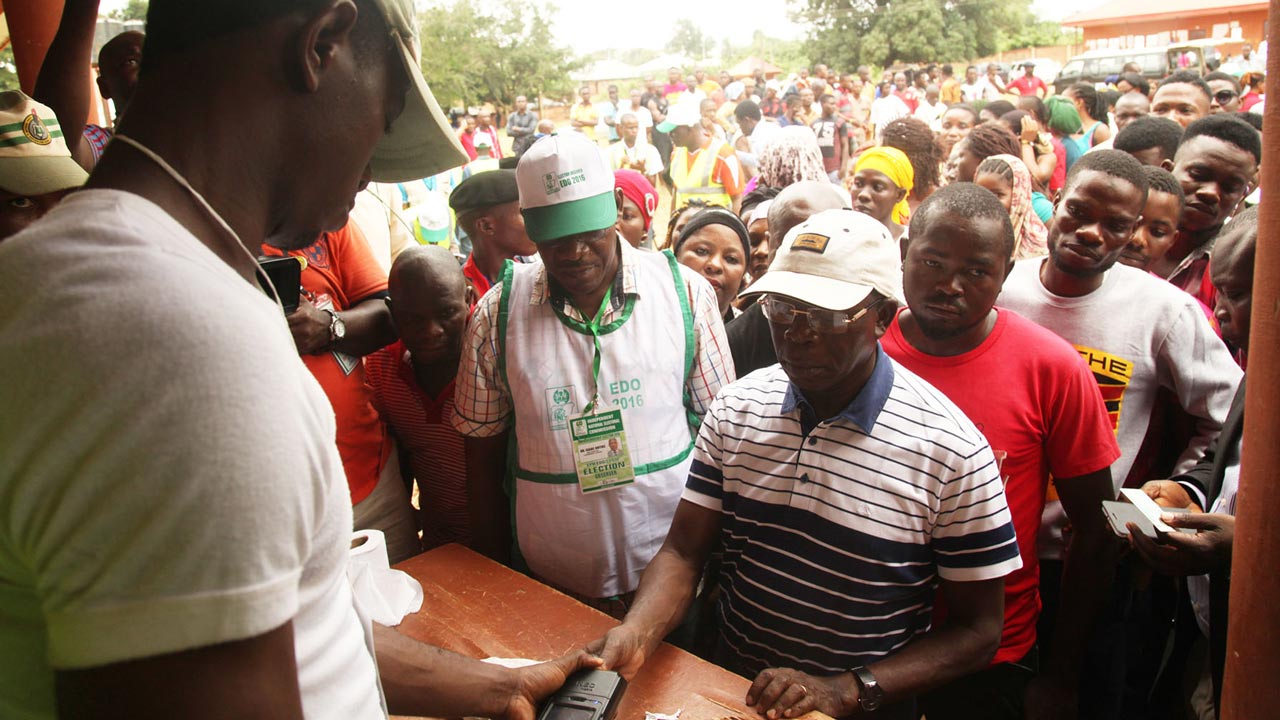 Governor Adams Oshiomhole's thumb being captured by a card reader at Ward 10, Unit 1, Iyamho to cast his vote in the Edo governorship election, on Wednesday.PHOTO: PETER OKHIRIA 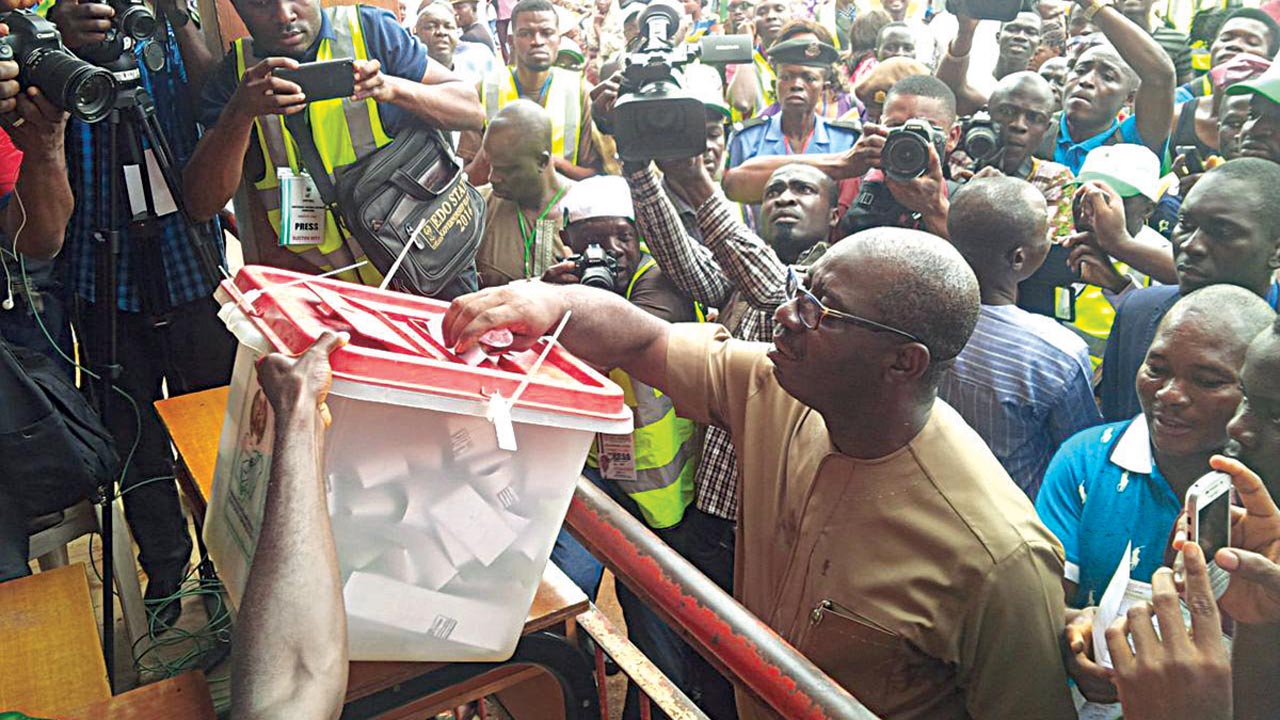 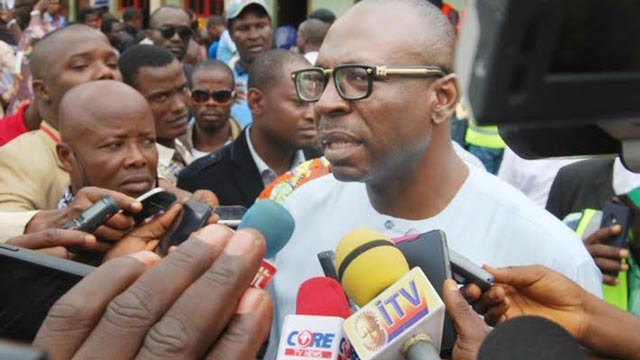 The residents of Edo State yesterday went to the polls to elect a new governor. The election which began at 8:30 a.m. witnessed a massive turnout of voters .

Materials arrived early at most polling units across the state. In Auchi, Etsako West Local Government, voting commenced early. At Izaiure, the home town of the All Progressives Congress (APC) deputy governorship candidate, Philip Shaibu, there was a large turnout of voters. They voted immediately after their accreditation.

”The machine seems to be working well. My expectation is that the people will vote for the continuity of progress and infrastructural development that APC is delivering in Edo State,” he said.

Some voters who spoke on the election described it as one of the most peaceful ever held in the state. ‎However, there was an earlier problem of the card readers not working well, but it was quickly addressed by the electoral officers.

The National Chairman of the APC, Chief John Odigie-Oyegun was defeated at his polling unit in Ward 2, Unit 2 in Oredo Local Government where the PDP governorship candidate, Dr. Idia Ize-Iyamu also voted.

Odigie-Oyegun voted at exactly 11:00 a.m. at the Staff Training Centre in the Government Reservation Area (GRA) in Benin City, where the APC recorded 69 votes as against the 78 that the PDP got .

Despite the defeat at his polling unit, Odigie-Oyegun expressed satisfaction with the conduct of the election and turnout of voters.

“They always say it. It always happens. But voters are not fools. What we tell them is take the money, vote your conscience. I am positive, it isn’t hope, I am certain we are going to win,” he said.

The APC governorship candidate, Godwin Obaseki, who voted at Emokpae Primary School in Oredo Local Government, Ward 4, Unit 19, arrived at the centre at exactly 9:30 a.m. and was accredited. He voted around 10:30 a.m.

Obaseki, who described the exercise as “very peaceful” also said the turnout of voters was very impressive. “The officers from INEC are doing their best and there is sufficient security. Nobody is punching or crowding them. If the situation continues this way, certainly it is something we are going to be pleased with. Let’s wait and see at the end for the day whether we will exceed the expectations. I am quite pleased with what the security agents have done. We have to come here unarmed because they got all policemen attached to VIPs withdrawn,” he said.

Governor Adams Oshiomhole hailed what he described as the improved electoral process introduced by INEC, whereby accreditation and voting were done at the same time.

Oshiomhole who said he was impressed with the large turnout of voters, however, noted there were some incidents in some parts of the state which the security agencies and INEC should look into.

“I have always wondered why INEC wants people to accredit and wait and you start later. For the middle class, that was not something many of them could cope with. For the poor people, they have had to carry the burden of our democracy by waiting the whole day. So, I believe that INEC has made a sensible improvement.

“You get accreditation, you vote and you go home. It doesn’t have to cost you a whole day. I think this is a very civilised way of doing it. If every other thing goes perfect, this is good,” the governor said.

But the All Progressives Grand Alliance (APGA) candidate, Mr. Osaro Onaiwu described the election as a total failure, alleging voters’ intimidation and inducement by PDP and APC members with a view to rigging.

He noted that the election at many of the voting centres was peaceful, especially in Alaghodaro quarters, Seventh Day Adventist Primary School where he voted.

At his residence, he told journalists: “INEC cannot conduct a credible election because it is part of the inducement. I pray that INEC should not declare the election inconclusive, otherwise, I will call for a total cancelation of the exercise. The future of this country is bright but political leaders have no integrity, inducement and rigging have ruined politics. As we progress, however, in our democracy, we need more people to resist inducement, rigging to change the entire face of democracy.”

Meanwhile, the leadership of the PDP last night accused the APC of plotting to overturn what it said was its “secure victory.” But the APC denied the charge.

The Spokesman of the National Caretaker Committee of the PDP, Dayo Adeyeye, who issued a statement, claimed that the results already showed that the PDP was far ahead.

In the same vein, former Governor, Lucky Igbinedion, said although there was so much thuggery and financial inducement by the other side, the PDP was “holding the ground by the grace of God.”

“Having received results from our agents at approximately 1800 of the 2627 polling units spread across the 192 Wards in the 18 local government councils of Edo State, we can confirm that our party has
attained a near-unassailable lead in the Edo State gubernatorial election”, a statement from the PDP concluded.

“The results so far confirm to us that our candidate has garnered approximately 55 per cent of the total votes cast. We have every
reason to be confident that we will maintain this trend and coast home to victory.

“However, we are aware that members of the All Progressives’ Congress (APC) led by Governor Adams Oshiomole in collusion with officials of the Independent National Electoral Commission (INEC) led by Mrs. Amina Zakari, are relentless in their efforts to manipulate the results of this election. We are aware that Governor Oshiomole is currently moving from collation centre to collation centre with the objective of manipulating the results as much as possible.

“ We will like to reiterate our earlier notes of warning. The Edo people, and our party, will resist any attempt to subvert the collective will of
the people as expressed by their votes today.

“We urge our members and supporters in the state to continue keeping the faith by guarding their votes at the ward collation centres and local government collation centres. Eternal vigilance is the price we all have to pay for victory.”