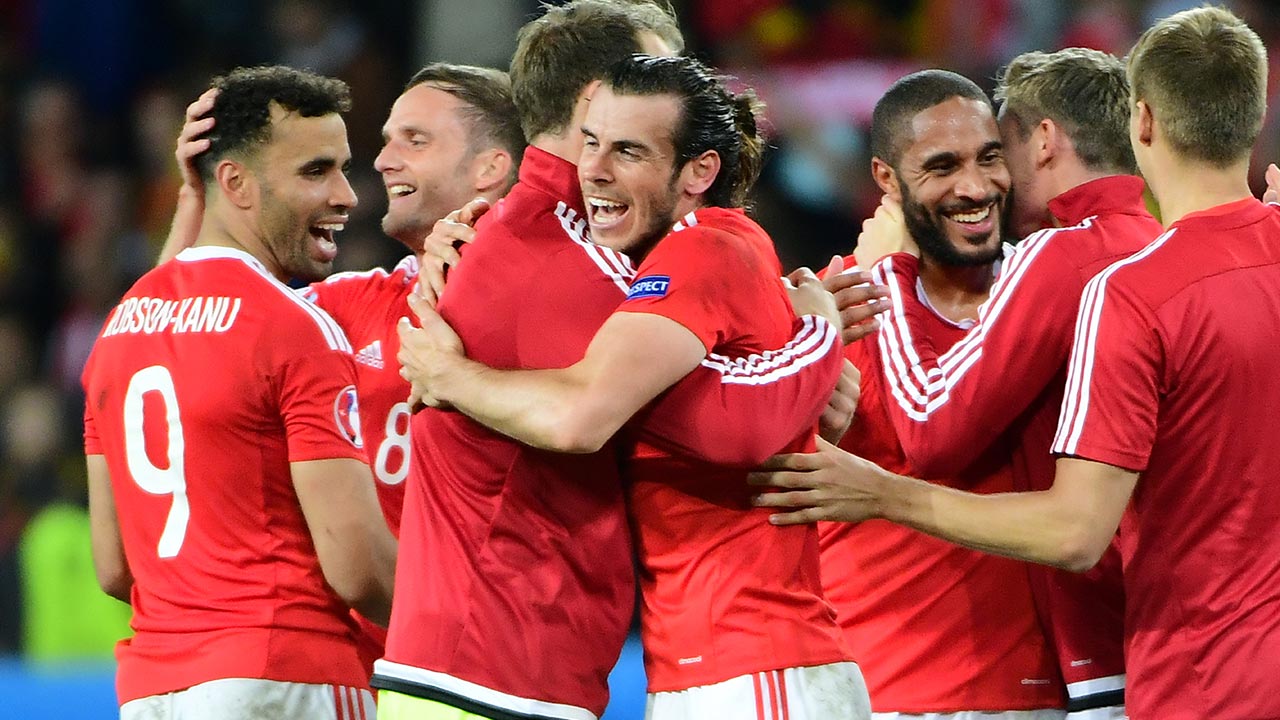 Wales' forward Gareth Bale (C) celebrates with team mates after the Euro 2016 quarter-final football match between Wales and Belgium at the Pierre-Mauroy stadium in Villeneuve-d'Ascq near Lille, on July 1, 2016. Wales won the match 3-1. EMMANUEL DUNAND / AFP 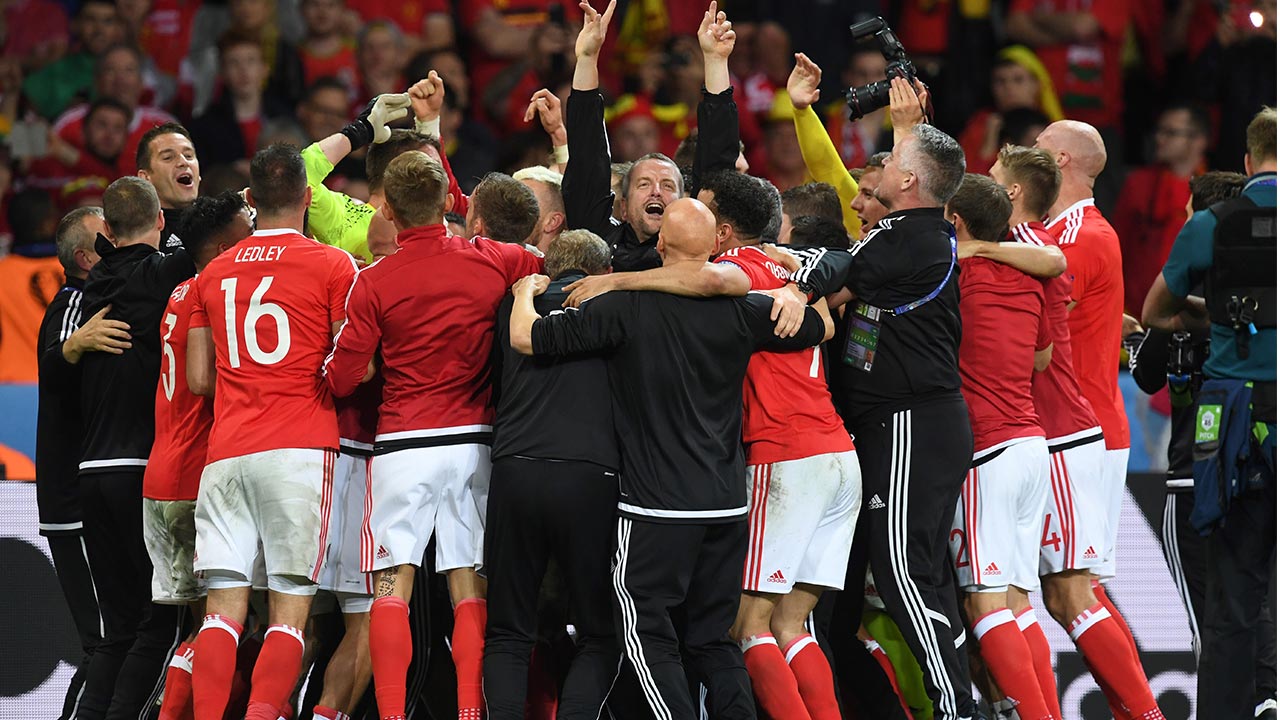 Wales' team celebrates after the Euro 2016 quarter-final football match between Wales and Belgium at the Pierre-Mauroy stadium in Villeneuve-d'Ascq near Lille, on July 1, 2016. Wales won the match 3-1. PAUL ELLIS / AFP 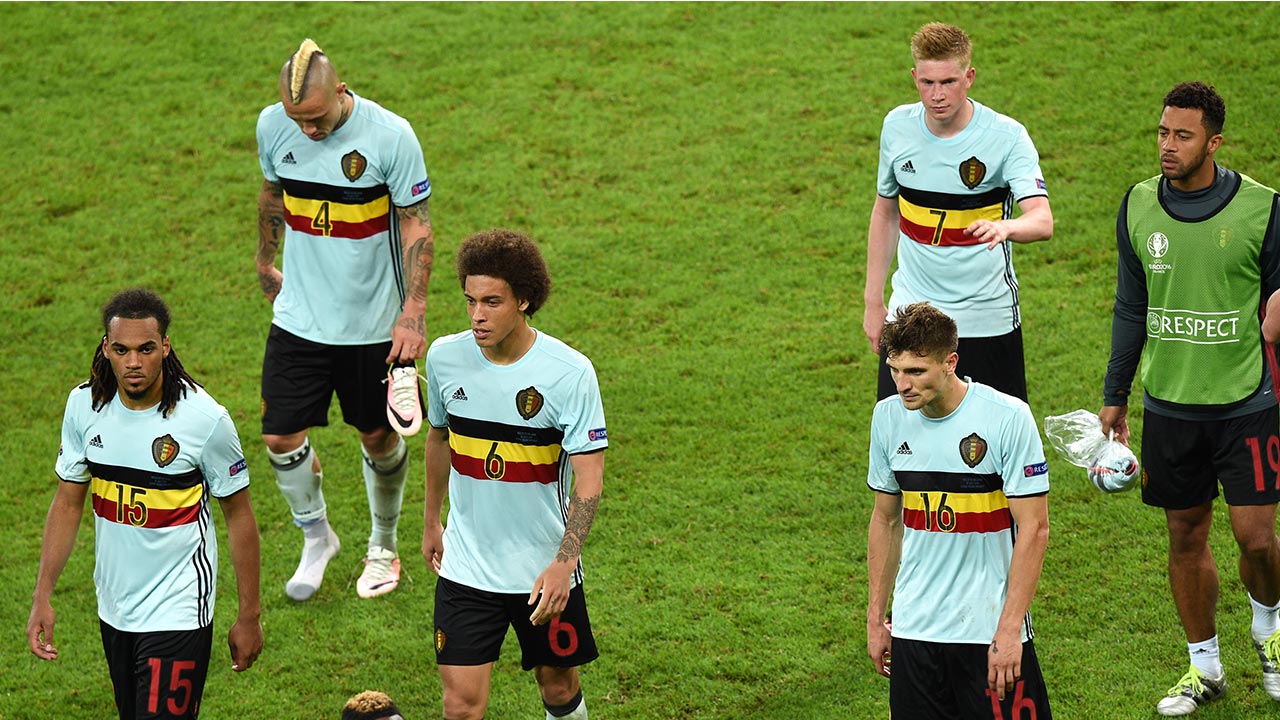 Belgium's players react at the end of the Euro 2016 quarter-final football match between Wales and Belgium at the Pierre-Mauroy stadium in Villeneuve-d'Ascq near Lille, on July 1, 2016. DENIS CHARLET / AFP 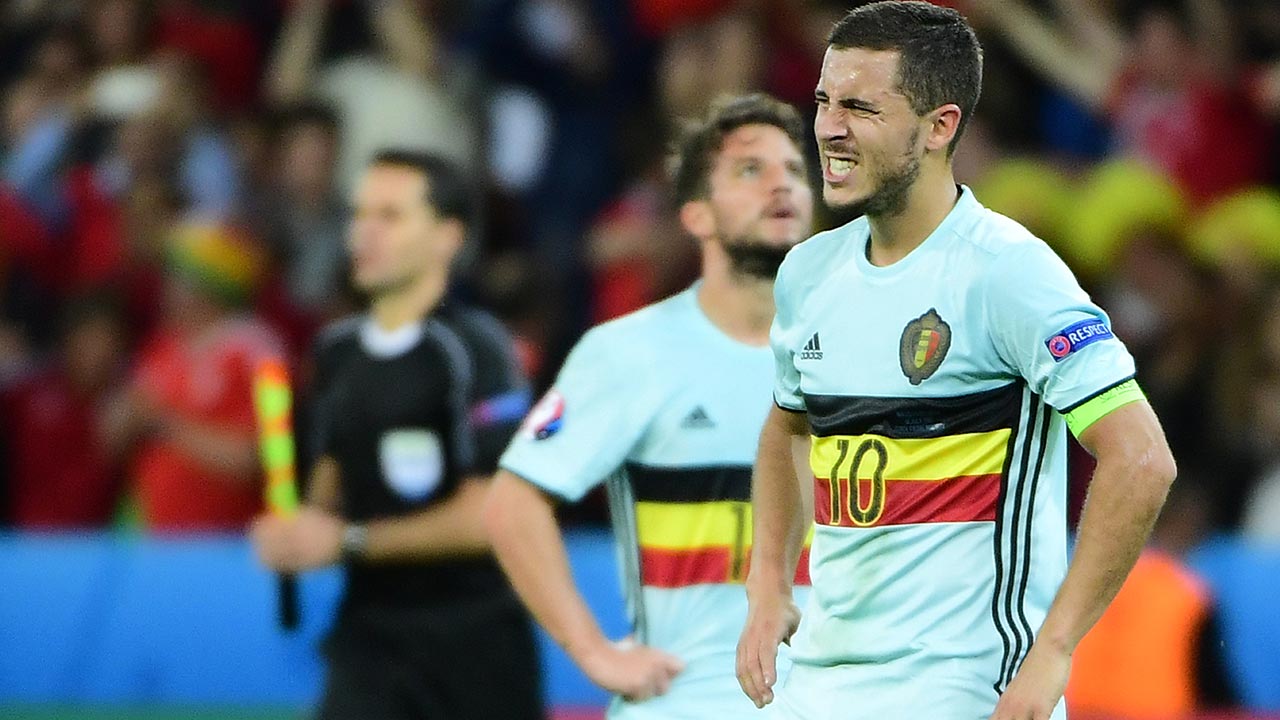 Belgium's forward Eden Hazard (R) reacts at the end of the Euro 2016 quarter-final football match between Wales and Belgium at the Pierre-Mauroy stadium in Villeneuve-d'Ascq near Lille, on July 1, 2016. Wales won the match 3-1. EMMANUEL DUNAND / AFP

Gareth Bale’s dream of winning Euro 2016 with Wales remains very much alive after he and his teammates dug deep to send Belgium packing in remarkable fashion in Friday’s quarter-final.

Wales recovered from Radja Nainggolan’s missile-like opener in the 13th minute to win 3-1 in Lille but it was unsung captain Ashley Williams, striker Hal Robson-Kanu and substitute Sam Vokes who got the goals rather than Bale.

A semi-final clash with Portugal sets up an enticing clash between Bale and his Real Madrid teammate Cristiano Ronaldo.

As ever the hopes of Wales fans at the Stade Pierre-Mauroy were pinned on Bale shining as he had done earlier in the tournament.

With his parents watching, Bale had an influence on proceedings but such a spectacular victory owed more to a huge collective effort.

Wales did not reach the quarter-finals by being a one-man team, but they could not have made it this far without Bale.

The world’s most expensive player’s three goals in three games helped Chris Coleman’s side through the group stage and it was his cross that forced the own goal by Gareth McAuley that allowed Wales to beat Northern Ireland in the last 16.

But then there was Robson-Kanu’s winner against Slovakia in their opening game and Aaron Ramsey’s sterling display in the 3-0 trouncing of an abject Russia, not to mention the collective efforts of their well-drilled defence.

Back in 1958, the Welsh had to make do without their star player John Charles as they lost narrowly to Pele and Brazil in the World Cup quarter-final in Sweden.

Yet, rather than Bale’s individual talents, it was the character and team spirit of Coleman’s side that shone through as Wales came from behind in remarkable fashion in northern France.

Belgium had threatened to blow them away in the first quarter of an hour but Wales battled back, with Bale drifting in from his position on the right to a more central role from where he could help influence proceedings.

It was Ramsey’s corner that led to Williams equalising, but Bale made his presence felt, robbing Eden Hazard of the ball before embarking on a trademark 60-yard run which ended with a right-foot shot saved by Thibaut Courtois.

Wales ended the first half utterly on top and Belgium responded by starting the second period strongly, with Hazard almost finding the target with a scorching effort after cutting in from the left flank.

But it was just a matter of minutes after that when Bale’s long ball forward found Ramsey and his pass picked out Robson-Kanu.

The turn to take three Belgian defenders out of the game was world class and the finish was as cool as ice from a player whose role in this Welsh side cannot be underestimated.

It was a sign of how Robson-Kanu — now a free agent after being released by Reading — has grown alongside players of the calibre of Ramsey and Bale.

Indeed, the only negative on a glorious night for Wales was a booking for Ramsey that will cruelly see him miss the semi-final.

It was from Bale’s right flank that Wales got their killer third goal but it was Chris Gunter’s cross that was headed in by Vokes to spark wild celebrations from the fans at that end of the field.

Bale had called on those supporters to be the Welsh team’s “12th man” in Lille, where they were significantly outnumbered by the Belgians.

The Red Devils’ supporters had hoped to see their team, with their own world-class talents in Hazard, Kevin De Bruyne and co reach a first major tournament semi-final since the 1986 World Cup.

But instead it is Wales who deservedly progress to a first ever tournament semi-final, and the first by a British team since England on home soil at Euro 96.

In Ronaldo and Bale both Portugal and Wales can rely upon extraordinary talents capable of turning huge games with moments of magic.

They have both proved that in Champions League and Copa del Rey finals.

Yet, for once Bale wasn’t needed to ride to the rescue thanks to a stunning all-round effort from Coleman’s superb team.

Bundesliga stars glad to train again, even with social distancing
2 hours ago  Sport

Barcelona president seeks reshuffle of club board
28 mins ago  Sport